An egret standing on the railroad track
Said, “I’m quittin’ this town and I ain’t comin’ back.”
With a wary eye he watched for the freight
That he knew would take him to the Golden Gate.

Tho one could see his tail feathers draggin’
It was plain to see that his spirits weren’t laggin’.
“So WHY can’t that bird just FLY there?” you say.
Well, the tired old bird’s seen a better day.

Now ‘twas Christmas morn as he hopped the freight
And he was just hopin’ that it wasn’t too late.
For far too many years had “flown” by where
He’d tallied up thousands of miles in the sky.

(The train went on making nary a stop,
With that snowy white egret perched on the top.)
It went thru the towns and the countryside.
For an aging old bird that was quite a ride!

Then at last the train had chugged to a stop.
A good thing for old egret was ready to drop!
And then as he thought the ride was too harsh,
His rheumy eyes spotted the reeds of a marsh.

“I’m home!” then he said, “And no more I’ll fly.
I can be happy here till it’s my time to die.”
And that was HIS present on Christmas day…
A nice restful place…  and I’ve no more to say. 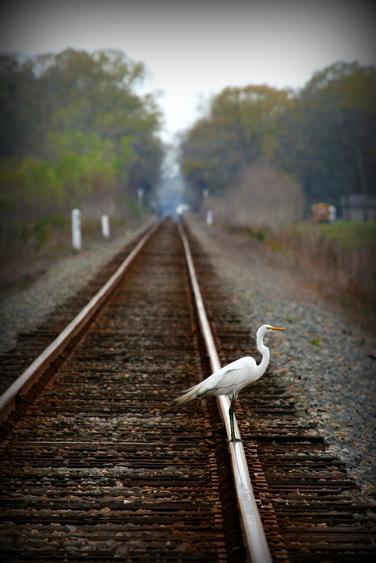